Barbara: presentation on Banned Books Week (see https://www.amnestyusa.org/banned-books-2020/)
AIUSA's actions in support of Banned Book Week 2020 (can be submitted online or printed and send via snail-mail)
Jeff: discussion of AI report on police brutality in the USA (The World Is Watching)
Actions related to this report:
Group discussion of U.S. gun laws, police use of guns and other weapons, upcoming elections
Next meeting (online): Wednesday, 21 October 2020, 7:30 p.m.
at September 16, 2020

AIUSA has issued this certificate to Amnesty International Group 342 in recognition of our chapter's participation in the 2020 Write for... 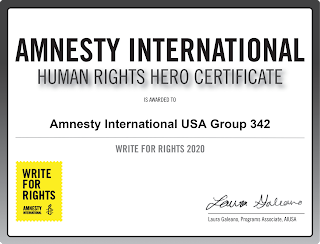