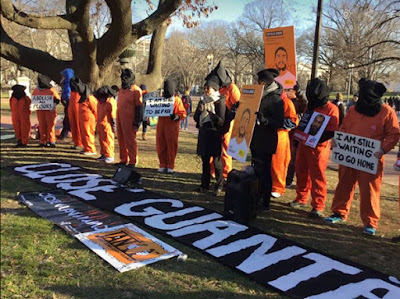 Friday, January 11, 2019 marked the seventeenth anniversary of the arrival of the first detainees at Guantánamo Bay Prison. I attended two events in Washington, D.C., that day: a panel discussion and a rally.

The discussion examined the history and current state of Guantánamo Bay Prison: 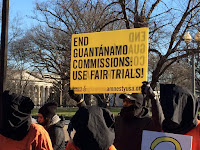 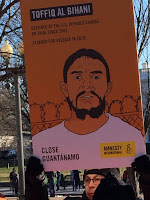 (A video of the panel discussion)

A group of activists (composed largely of members of Witness Against Torture) wearing orange jumpsuits, their faces covered by black hoods, solemnly processed to the front of the park and formed a semicircle. Various speakers addressed the attendees (numbering about 50 persons). Reverend Ron Stief, executive director of the National Religious Campaign Against Torture, offered an opening invocation. Medea Benjamin (CODEPINK), Kathy Kelly (Voices for Creative Nonviolence), Daphne Eviatar (Security with Human Rights Program, AIUSA), and Andy Worthington were some of those who spoke.

(A video of highlights of the rally)