Greetings and Personal Updates
Treasurer's Report (Tilo): Wells Fargo almost closed our account because of inactivity, but Tilo fixed it. Some discussion about what to do with the money we have in there. Decided to keep using it for postage, stationery, event supplies/fees.
Amnesty News (Barbara): Discussion of new (published last month) book Know Your Rights and Claim Them: A Guide for Youth, by Amnesty International, Angelina Jolie, and Geraldine Van Bueren.
Coordinator's Report (Jeff): Our group's monthly meetings are now planned by committee (Jeff, Barbara, and Bob). Agenda will include time limits for each topic to help us stay on track, as well as a section called "Priority Campaigns and Issues" with topics that we are following throughout the year.
Priority Campaigns and Issues
Updates: Planned to get Kabylia update from Marksen and dealth penalty update from Brendan, but neither is at this month's meeting.
Reviews: Bitter Lake documentary (directed by Adam Curtis) about why the USA got involved in Afghanistan
Write for Rights: Tonight we signed cards and letters on behalf of five of the case files (Belarus, Thailand, Guatemala, Ukraine, Israel)
Next meeting: 15 December 2021, 7:30 p.m., via Zoom
at November 17, 2021

Minutes for May 2022 meeting 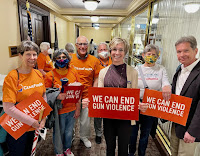